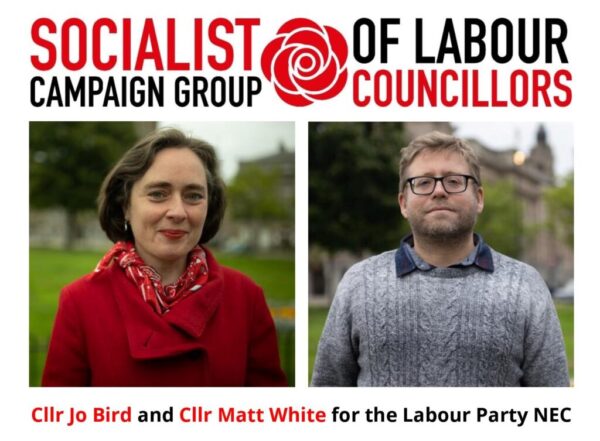 The Socialist Campaign Group of Labour Councillors is backing Cllr Jo Bird and Cllr Matt White to stand in the Labour councillors section of the upcoming elections to the National Executive Committee of the Labour Party.

Cllr Jo Bird and Cllr Matt White are campaigning to:

Cllr Jo Bird was well supported across the Labour Party in the NEC by-elections held earlier this year, with 118 CLP nominations and 46,150 members’ votes.

Cllr Jo Bird said, “My Jewish great-grandparents fled fascism in Europe. There should be no place for antisemitism, Islamophobia or any form of racism in our Labour party. We live in a diverse society and world. We need much more understanding and much less hostility – not least because Black Lives Matter.

“Party members are hungry for fair and just disciplinary processes worthy of our Trade Union, Labour and Co-operative values. Labour must hold free and fair internal elections. The Labour Party can be a fabulous and supportive family. Don’t Leave, Organise!”

Cllr Matt White was previously Chair of Haringey Council’s Pensions Committee and Board. He has recently become the Cabinet Member for Corporate and Civic Services.

Cllr Matt White said, “I have campaigned successfully against the privatisation of land and mass demolition of council homes in Haringey. I led campaigning trips to marginals in the last two general elections, in 2017 insisting on campaigning for a socialist government rather than just defending Labour-held seats.

“Since being elected as a councillor, I have worked collaboratively to change Haringey’s approach: to build council homes at council – rather than so-called ‘affordable’ – rents, insource services, pay care workers the London Living Wage and increase Council Tax support.

“As Chair of Pensions, I have worked for decarbonisation and community wealth building in our investments. Now in Cabinet, my priorities are insourcing and ethical debt collection.”

Cllr Jumbo Chan, national convenor and one of the founders of the Socialist Campaign Group of Labour Councillors, said, “Since our founding at the beginning of April, many councillors from all over the country have expressed support of our aims, demonstrating a clear and urgent appetite for socialism in local government.

“Labour councillors can play an important role in fighting against the destruction wrought by a decade of Tory austerity and four decades of neo-liberalism. Instead of being prisoners to remote technocratic visions, we can build on the ambitious class-based programme unleashed by Jeremy Corbyn’s leadership. As Tony Benn once said, those asked to wear the red rosette ‘are not just here to manage capitalism but to change society’.

“We look forward to supporting Jo and Matt over the coming few months as they bring these most powerful of ideas to the fore.”

Local government candidates need at least five Labour Groups to nominate them in the coming period. In October, thousands of Labour councillors across the country will receive their NEC ballot papers.